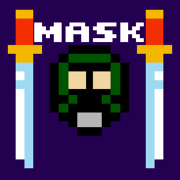 Mask is here for a reason. We aren't here simply to exist, but to become the best. Our Masks symbolize and show our unity, as we are one strong unit, not just a mass of people. We will become the strongest of all clans. We will be feared. No matter who's in our way, we will attack good and evil to get what we want...


Always wear the (Mask) Clan tag and the Gas Mask.
The rest is free to be edited.

Anyone who isn't on this list is not in Mask.

First Clan War conducted was with SV and resulted in our defeat at their hands with a score 10-8.

Second Clan War was against BZ and reached it's end with score being 10-8 in our favor.

Fourth Clan War was vs BLOODY and ended in a 10-5 win for us after a small reset of the previous score that was 7-1 due to the connection issues suffered by one the BLOODY members.

Fifth Clan War was vs SD and ended in a 10-6 defeat for us here at Mask.

It speaks for itself.

wow, oldest clan? I'm really interested to join when recruitment is open. hoping for you leader to return soon
0 x
YOU FAAKING BITH NIGR BE CAREFUL WHAT YOU DO YOU ARE FAAKING YOUR FAAKING LIFE

If he does not come back, which I doubt, you will happily be reqruited.
0 x
https://www.youtube.com/watch?v=6LbawmqBkeM
Dank
Top

The oldest SFD clan have been finally reborned? Good luck bro. It's seems like nostalgy

Thanks alot man, and heck it is
2 x
https://www.youtube.com/watch?v=6LbawmqBkeM
Dank
Top

well we haven't warred a clan for a long time, wanna have a clan war?

well we haven't warred a clan for a long time, wanna have a clan war?

There's only one member inside , their command probably would win. But im not sure , because they lost a lot of Skill power... They are legends now. Someone of them are probably Adult. They have own life problems now , like "Army" , "Job" and some other sh*t , like reasons : why dont they wanna play SFD anymore? Because this game is changed , and probably not to the way they've been waiting for
They are from the "first cut of SFD universe"
2 x
-Content-maker.
Top

Indeed we have lost most of our skill power. I the last member am pretty bad after not playing for so long, but with more training and practice I will get better and someday recruiting will begin.
0 x
https://www.youtube.com/watch?v=6LbawmqBkeM
Dank
Top

damn lol.. i missed the " Inactive " tag next to the members. why would you reopen this clan if every players in it are inactive?
1 x
Top

Becuase not all of us are inactive
0 x
https://www.youtube.com/watch?v=6LbawmqBkeM
Dank
Top

A clan topic needs 4 members at least,and you posted it while being only the one of them.inactives wouldnt count....wt.special treatment
Last edited by Tom Th3 Assasin on Sun Jun 17, 2018 4:43 pm, edited 1 time in total.
0 x
There is not a single thing that I can't do

Tom Th3 Assasin wrote: ↑
Sun Feb 11, 2018 12:51 am
A clan topic needs 4 members at least,and you posted it while being only the one of them.inactives wouldnt count....wtf..special treatment

Well the rules dont state if these members need to be active or not soo...
0 x
https://www.youtube.com/watch?v=6LbawmqBkeM
Dank
Top

Tushy, I noticed that, you have forgotten a letter from KNowledge's name.
1 x
Does it hurt?
No, I'm just humming a little song called "Ouch!"
Top

Superfighters Deluxe. How swell. After the next update I might need to start playing again so I can get my ass-kicked by some good players.
0 x
-Evilsack

Evilsack wrote: ↑
Sat Mar 31, 2018 12:12 pm
Superfighters Deluxe. How swell. After the next update I might need to start playing again so I can get my ass-kicked by some good players.

My clan servers are always up if you want your ass kicked by some godlike players in sfd..
0 x
Top
Post Reply
68 posts